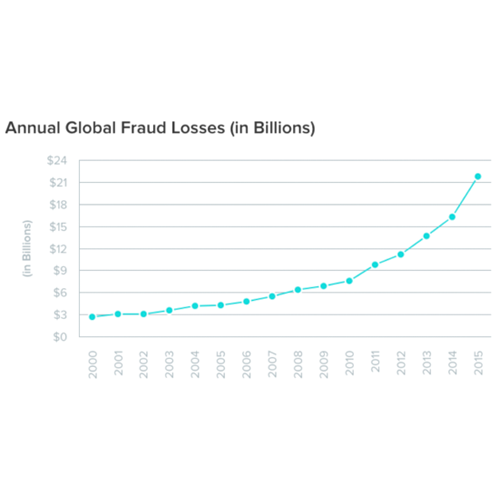 Why You Should Consider Credit Card Security For Your Business Purchases

THE PREVALENCE AND COST OF FRAUD

Credit card fraud today seems about as common as McDonald’s locations. Whether it’s a personal credit card, or another company whose information has been hacked. It’s no secret that it happens and consumers and companies alike pay a lot of money to protect themselves from such occurrences, rightfully so.

In 2016, credit card fraud losses topped $24.71 BILLION worldwide. Billions of dollars were lost in fraud alone! With projections to hit $32 billion in 2019. With 7.6 billion people in the world, that may not seem like a big number, but consider 47% of that to be from the United States alone.

Retailers spend and incredible amount of money ($6.47 billion annually) to prevent credit and debit card fraud. Year over year it is climbing, and so is the amount of losses being experienced. With this kind of data, not only should you be protecting yourself, but you should really consider protecting your business transactions as well. What good does it do you to accept credit cards if those transactions are not secure and only cause harm to your customers?

FROM THE CONSUMER PERSPECTIVE

According to a report from Javelin Strategy, there’s a new identity theft victim every two seconds, and many of the incidents involve credit cards. Older americans seem to be the prime target statistically. According the the FTC, 24% of fraud cases involved adults aged 50-59; 20% were aged 40-49; and 21% were 60 or older. That leaves only 35% of consumers aged 39 and younger who are targets for identity theft and fraud.

The individual loss can vary widely based on what information was taken from the consumer. However, the average losses for consumers was $1,343 in 2014. For some individuals, this can be a staggering amount and loss to their financial stability.

Though EMV chip cards have made some payments safer, card-not-present fraud will remain a growing problem for years to come. This increased security forced criminals to shift their focus to EMV 2016 and 2017 included some of the largest data breaches ever seen including companies like Yahoo and LinkedIn.

Consumers have plenty of options when it comes to protecting their credit information and identity which range from $100 to $300 annually. The benefits for the consumer include credit inquiry alerts, credit monitoring, assistance if their identity is ever stolen, reimbursement for costs associated to identity theft, and monitoring the web to see if private information is available for sale. Consumers are so willing to spend money on protecting their identity because the cost of having their identity stolen costs them substantially more. Additionally, there is time and energy consumers have to put forward to get their life back to a “normal” status again.

Overall from a consumer standpoint, they just want protection. They want to know when they purchase something, even if their information is stolen, they’re not out $2,000 and they aren’t at risk for having all of their personal information taken from them. They want to feel secure.

WHAT DOES IT MEAN FOR YOUR BUSINESS?

Some business owners would say they are fine because the consumer should be protecting themselves. However, it’s not just their data you should be worried about. All of your personal business data can be breached if someone really wants to get into it.

Ransomware isn’t just affecting individuals anymore, but is moving into the business world. There is an estimated $1 billion per year for the cost of ransomware crimes. With those costs expected to climb, it’s not only important businesses look at their security measure, it’s important they start to truly implement them.

HERE ARE JUST A FEW REASONS SMALL BUSINESSES ARE A PRIME TARGET:

Make sure your credit card equipment is PCI DSS Validated as of TODAY. Yes, they may have done through the process in 2011, but being Validated is an ongoing process year after year. You can check on the PCI Website at any time.

Check your readers yourself. With skimmers being put on just about anything these days, it’s a simple check on your reader to prevent thousands of dollars in damage.

Don’t have someone on-site? Provide loyalty card options. In addition to providing an additional payment option, you are keeping your customers at your location versus your competitor. Providing this transaction can limit being compromised to data thefts. With online transactions or an on-site card dispenser, you can can be sure your customers will easily be able to access a loyalty card for your locations.

HERE IS A ONE CUSTOMER WHO DID GET HACKED PREVIOUS TO PURCHASING WASHCARD AND THEIR STORY.

“We found out the hacking had been going on for about a month. Of course we immediately shut down our existing credit card system, but it was too late. Over the next several months, we learned just how much this breach had affected our business, our local communities, and our personal lives.

Even more traumatic was the emotional nightmare of facing down a community that no longer trusted you. It was a shock to me and my customers.

I never thought that this could happen to me. Who would attack a car wash, in a small town in the heart of the USA? Everyone blamed us. For months, there was a boycott of my wash.

We will probably never know the total dollar amount this breach has cost, but we have constant reminders of who it has affected.

We called in an expert to help us become safe and PCI compliant, he said the only way to move forward was to find a whole new system. Our system was only three and a half years old, and was only slightly less expensive than a system from WashCard, but in the end, cost us so much more.

This time around, price could not and would not be the deciding factor. We needed a system that would answer our number one question and concern, “Safe– is it safe? Is it PCI compliant, and will it continue to be compliant?”

After asking many questions, I felt I could trust WashCard. I felt relieved when they offered a solution that would finally fix my problems, and give my wife and I the peace of mind to get back to a normal life.