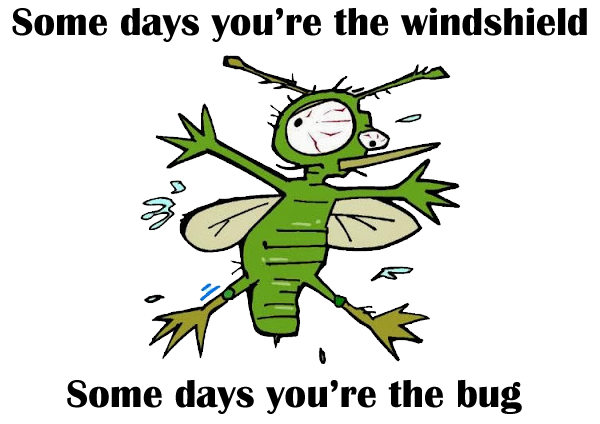 What Is Bug Splatter?

The Science Behind the Bug Guts On Your Windshield

When you think of road trips, what’s the first thing that pops into your head? If it’s the sheer amount of bug guts you end up with on your car, this is the article for you. Or, if you’re a car wash operator wanting to learn more about how to educate your customers, this is also the article for you.

What is bug splatter? And why is there less of it these days?

A lot of science can be found in those little dead bug bodies, and lots can be found out from them. Scientists can understand your whereabouts because certain insects and bugs can only be found in certain areas. This can depend on different regions, states, counties, rural, or urban areas. So, if you’re driving across the country, your vehicle is truly an entomologist’s field day! Forensic entomologists examine insect fragments found on cars to determine the location and areas of travel.

It can also be determined if you were driving during the night or day.

During the day, you will likely to get a healthy mix of insects. Most of which are small flies, bees, wasps, even butterflies. All of which can be attracted to the yellow and red reflectors on vehicles. Night-time is when the big guys come out with bigger and more numerous splatters. Just like your lights at home, insects are attracted to your headlights as well.

Certain bugs only become windshield splatter during specific seasons. Love bugs are a prime example of this. Traveling through most areas in the south during late spring, you’ll see the dreaded love bug season. Depending on conditions in a given year, they can be seen and struck by your car in great numbers. Love bugs have a high acidic body chemistry. So, if you value a flawless paint job, you’ll want to wash your car pretty much right after your trip.

Not What It Used To Be

You may have noticed that aside from major flights, emergences, and migrations, that bug splatter just isn’t what it used to be. There are different theories about why. Scientists believe that urbanization, pesticide use, and manicured roadsides all contribute to fewer bugs on the road. However, others believe it’s a little more complex. While all of these things make an impact, John Rawlins, head of Invertebrate Zoology at the Carnegie Museum of Natural History, believes that vehicle design has a lot to do with it.

Aerodynamic Cars of The Here and Now

Boxy cars of yesteryear have become more and more aerodynamic with each decade. Bugs that used to hit vehicles head on, now slip into the airstream and fly right over them.  But some scientists believe this is a sign of the much wider “insect apocalypse” affecting the planet. A recent survey by Kent Wildlife Trust in the UK found that 50 percent fewer insects were splattered on car windscreens compared to 15 years ago. The researchers wondered whether this decline in bug splats was actually the result of modern cars becoming more aerodynamic and less likely to suffer from a head-on collision with a passing insect. So they actively recruited classic car owners to take part in the survey.

However, even while accounting for this, a significant decline in insects was evident. But there are many factors behind this decline of bug life, scientists frequently point the finger at climate change, the use and abuse of pesticides, destruction of habitat, and disease.

Why Car Washing Is Critical

While the science behind bug guts is cool and there is less of them splattering your car, they can still damage paint jobs, and let’s be honest, they’re not nice to look at. So, it is best to get your car washed once you reach your destination to prevent damage to your cars paint.

Plain and simple, bugs have acid. When they’re squashed on your beautiful car paint, it releases that acid. In some cases, this can start to cause damage to your vehicles paint right away. However, in other cases, that damage can occur over time. Love bugs can have an acidity level close to lemon juice and black coffee. And that’s on your car. Eek!

So, how does one best protect their car before and after a long road trip (or just during heavy bug seasons)?

The first is a good coat of car wax. This preventative measure puts a protective layer between the finish on your car and the bugs trying to ravage your paint job. Should you get bugs on your car, do not scrape them off. This will likely damage your car far worse than the bugs themselves. Even scrubbing with a dry towel can cause fine scratches. Those fine scratches catch small bits of dirt and grime over time, and eventually get larger.

Bug solvents can be used to loosen and lift the bugs off the paint of your car. If you’re in a region where bugs are a regular or daily issue, keeping a good bug remover and towel handy can help your cars paint job withstand all the acid from those bugs. However, over all, it is your best bet is to go to a car wash. The sooner the better after long or bug heavy trips. Car washes have soaps and chemicals made not only to remove the bugs, but to protect you from future bug splatter.

Now, if your car is full of bug splatter from a month ago, you may want to try some at home remedies before going into a car wash. Those bugs have been caked on and need time to release and remove the acid. Once you’ve gotten a good portion of them off, then hit the car wash for that protective coating.

Overall, it’s a good idea to get a professional car wash once in a while no matter what. Keeping the dirt and grime of the everyday world off your car helps protect the paint and the undercarriage of your vehicle. Which in turn helps the overall health and life of your vehicle.

And, here’s the sales pitch, with the UWashApp getting bugs off the car couldn’t be easier. It’s simple to use and contactless. Your customers will love you for getting those bug guts off their car!